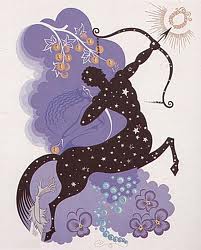 Yesterday, September 13th, fiery Mars leaped forward into fiery Sagittarius. Although mythologically speaking Mars is often thought of as the god of war he is truly more akin to the god of the quest. The quest seeking side of Mars is quite happy and fulfilled in adventurous Sagittarius. He is in Sagittarius until October 26th , and over the next month and a half we have been given the opportunity to get a lot done.

I have a dear friend with a tattoo that reads Carpe Mañana, and while the perpetual delay this speaks to has its attractions, such putting off will not only be difficult at this time but would be ill-advised.

Now is the time to do those things you keep telling yourself you’ll get to next weekend, only to put them off for yet another week. At the moment you may find that you’re not even thinking of putting things off, as optimistic, Pollyannaish Sagittarius can be of the mind that all things are possible. Do be cognizant about not taking on too much, as burnout can be a shadow of this archetypal combination.

Sagittarius is also a lover of truth. With the god of action dancing with this lover of truth we are called to have our actions and our words reflect an authenticity that when Mars was in secretive Scorpio was not required of us. Although it is always wise to be honest, the optimism of Sagittarius can at times dismiss the need for a filter when speaking or acting in your truth.

At this time it would be wise to take a beat before you speak or take action. Mars can be impatient and Sagittarius’s optimism can lead to unnecessary gambles- both in actions and in communication. Something may need to be said or done, but is it in the best interest of all involved to do or say now? Mars, in any sign, is not a fan of being slowed down, but sometimes Carpe Mañana is the most advantageous action to take.